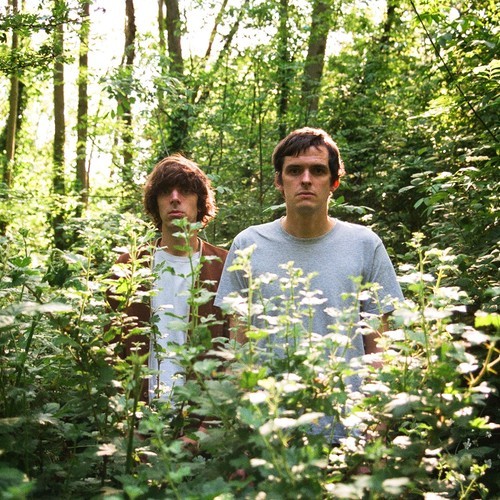 Ultimate Painting was formed when Veronica Falls and Mazes were touring together last year and members James Hoare and Jack Cooper started exchanging demos of songs. As it often happens the musical inspirations clicked into one another, and Ultimate Painting was formed. The first song released from their debut, scheduled to be out on Trouble In Mind later on this year (October 28th to be exact),  is a beautiful laid back aural picture where hues of some of the great pioneers of the understatement such as the Velvet Underground, Johnathan Richman, The Feelies shine through to blend into one unique brushstroke.

Ultimate painting is like lying in the grass staring at the afternoon sun with your eyes closed and starting a phosphene journey into your mind’s unknown territories. As the green and purple flashes form strange spiralling patterns you hear a distant voice sweetly calling you back to the reality. At first you ignore it, but as it repeats and gets closer you eventually open your eyes to find a shimmering, faceless smile in front of you. As you rub your eyes to try and understand what’s happening, a familiar face and body start to form around it and taking your hand into theirs. You look at the blinking eyes in front of you, and as you move closer to the figure, patterns start flying across the sky. You start to smile and realise that you’re lost in a strange figment of your imagination, and luckily you won’t be having to leave anytime soon.

Check out Ultimate Painting below and stay up to date on Trouble In Mind‘s Facebook page.