Just like Ringo at the end of  “Helter Skelter” ; I had blisters on my fingers after both times I saw Black Daniel live, and i’m sure I’m not the only one, as the cowbell I was hitting (hence the blisters) went around the ever so involved crowd several times, as did the microphone. 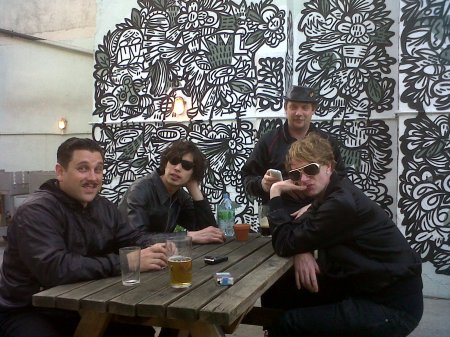 Black Daniel unleash all their fury onstage through a mix of electronic samples, distorted guitars and heavy drums. They are formed by Craig Louis Higgins Jr from New York on lead vocals and sampler, brothers Luke Ezra and Lamik on drums and guitar/vox respectively and sometimes feauture Japanese sample hitter “The Sweetness” Manabu from the Boicotts; i met them before their show last Tuesday at the Flowerpot in Camden to find more about this interesting band.

How did you guys come together? I know Craig worked organizing nights for Strictly Rhythm in New York  and Luke and Lamik were in Medicine Eight

Craig: Yes, i worked for Strictly Rhythm but i got bored with what they were doing and actually started organizing my own club nights, and I booked Medicine 8 to come and play.

How did it all fold together? Were you guys just like “Why don’t we start playing together?”

Lamik: Well, we started recording the second Medicine 8 album and we wanted some quirky vocals for it, and because we like Craig’s way of doing things and had a lot of fun together, thought, let’s get him over in the studio and see what happens. We started doing a few things but it kind of turned to something, we started writing and basically turned into a band.

Craig, is this the first time you are in a band or were you in any other bands before?

Craig: Yeah, it is the first time, I’ve never been in a band before. Actually, I lie, there was one when i was 7 years old with a kid called Chris Harvey, we were called Uncle Harvey’s… something..

Were you singing or..?

Craig: I was playing the guitar and he played pots and pans (all laugh) and his favourite song was “It’s Me Again Margaret”, and we did a cover of that….

Did Black Daniel form because you (Medicine Eight) just thought of having Craig on board or do you have similar musical  influences and similar bands you really like?

Lamik: Not so much, we have different sorts of influences musically, but i think it was more about, an overall common view of the world based on… really just partying a lot; it kind of felt like we were in a band already. We did a tour of the States as Medicine 8 and Craig came along as a “Tour Manager” which we didn’t really need as we were DJing, we just basically had a lot of fun on that tour.

As Black Daniel, have you played only in the UK or have you also played in the US?

Lamik: We did some shows in New York at Death by Audio..
Craig: This guy, Oliver from “A Place to Bury Strangers” used to, or still does build these guitar pedals called “Death by Audio”. We were all friends and started doing these parties in a big warehouse that they had in Williamsburg in Brooklyn..
Lamik: Yeah it was sort of like a commune.

Was the first Black Daniel gig in London or New York?

Lamik: It was here in London, at the Windmill, and the first one outside was supporting We Are Scientists in Stoke-on-Trent.
Luke: And there was this other band on the bill that night “She Wants Revenge” and they pulled a fast to say who was gonna go on second, this is like our second gig ever and we nearly ended up…. Well they were saying they wanted to have a fight to see who went on second
Craig: Sort of a West Side Story thing….
Luke: And then we were like, is this really what happens? Then luckily someone suggested flipping a coin which we did, and they won. The She Wants Revenge singer then came up and said “I’m so glad we flipped the coin, I really didn’t wanna have a fight!”
Craig: They all looked super mean and then they were like “I’m so glad!”

You supported Kasabian on their European Tour, how was that?

Lamik: Great, brilliant, we had done only a few gigs by that point, Craig was still living in New York; we had no idea of how it was gonna turn out, but in the end it was great, they really like us in France.

(To the “Sweetness”) What is the story behind your name and how did you get involved the band?

Sweetness: My surname is Sato which means sugar in Japanese, that’s why, maybe, Craig called me the Sweetness. I’ve been living in London for 3 years and am in a band called “The Boicotts”, i organized an event and we booked Black Daniel to come play because they had a drum kit and we didn’t..
Craig: He signed a “contract” if we’d let him use the snare drum, he’d have to be our musical slave for all of his life.. so now he sometimes comes along and plays the sampler for us!

Craig: For me, personally, I just wanna have as much fun and as much energy as possible, we don’t wanna be boring.
Luke: So many times, from starting to play gigs when we didn’t know what we were doing at all and every band we were playing with seemed to be the most boring, serious, head-up-their-arse band as possible. At first we were like “Oh.. maybe we should be serious and give nothing to the crowd”, but soon we said fuck it, we will! And ended up having so much fun since figuring that out that was the way to go.
Craig: Yeah, we just fucking go for it, why not?! Whatever comes natural, just go with it, as long as everyone’s having a good time.
Lamik: We come from a party background in the first place so we keep the party going onstage, where there’s nothing sacred!

How did the sound evolve? Mixing samplers with guitar driven rock, was it just a natural evolution?

Lamik: We (Medicine Eight) were electronic, although we were also into Acid House and into bands with guitars so we always fancied doing a bit of both somehow, and we always keep that in mind.

Craig, you were saying how The Big Black are one of your favourite bands, are you trying to bring any of that into Black Daniel’s sound?

Craig: No, I mean that’s on of the many bands i love, I’ve never seen them live but i love their sound, and it all makes sense, because i love Suicide so it’s all sort of connected. I love James Brown old soul music, that’s sort of punk, it’s all punk to me, the rebellion of the soul singers. Anyone that’s out there saying “fuck you” and being passionate about what they’re doing, that to me is punk rock.

Would you say your surroundings have influenced you? I mean, obviously the partying influenced the way you make music and portray yourselves but do you think London and New York had an influence?

Luke: Definitely, massive influences on both the albums that we’ve done; loads of it has come from shared kind of experiences and most of them have been in New York.
Lamik: Yeah, stuff that gets referenced, things that we do, characters that we meet..
Luke: We would go out as Medicine 8 3/4 times a year to New York to play and then we’d go to Miami for the WMC, so we were always going to America, mostly New York and always spending a lot of time up having fun….. So there’s probably four or five albums left in terms of brain, that’s all quickly disappearing… (All Laugh)

The new album’s title is “Let’s Get Sued!” how did that come about?

Luke: It’s just a way of saying “fuck it”, you know, everyone is so afraid of doing a mistake so people are restricted in taking risks and doing maybe things that might be a lot of fun. Everyone’s afraid of getting pounced on by angry lawyers or whatever, and I just hate that. Ans so that’s our way of saying “Fuck it, let’s do it anyways!”.

How did you come up with the name Black Daniel?

Lamik: I was reading the Bible, the Old Testament, I’m a very big admirer of, you know the……. hmmm I’m joking! (All Laugh) The Robin Hood character that saved the Hebrews or something..
Luke: I don’t know where it came from
Lamik: There’s the Black Jesus in the Madonna video and it’s kind of like that, but maybe “Black Jesus” is too much, so Black Daniel will do..
Luke: Short answer is we don’t know.

I thought maybe it was Black from the Big Black influences and maybe Daniel from Jack Daniel’s?

Luke: That will do! That’s what it was! Yeah we used to tell people the letters were spelled out on a Ouija board when we were in a hot tun with 7 girls…
Craig: It might be the pedophile gym teacher “Black Daniel” (All Laugh) Yeah, i think it’s the new one: there was this guy, Black Daniel, from a small town in Georgia and he was a gym teacher and a pedophile and….
Lamik: … we all really admired his work.. (All Laugh)

Lamik: We’d like to send our love to everybody in this world, and hope everyone can join us in this sense of serenity and peace and love and happiness before we all die because of 2012 or whatever!

If you’d like blisters on your fingers too, or just see the most fun band in London at the moment here are their upcoming gigs:

One thought on “I’VE GOT BLISTERS ON MY FINGERS!!”